“Who rescued who” is a common phrase used by people who adopt an animal. Oftentimes, dogs or cats come into people’s lives at the moment they need them most. This is the case with Karen and a tiny Siamese kitten named Coco.

Karen just lost her mother and had a hole in her heart that she didn’t think could be filled. Then fate stepped in, and she came across an ad on Craigslist about a kitten that just seemed off to her and she felt moved to investigate.

Karen lives with her boyfriend, Dave, in a flat in London and they were considering adopting but thought they would wait a bit. However, when she found an ad about a kitten that needed to go ASAP, she did what any animal lover would do. She called Uber and headed out to the country at night in the middle of winter. 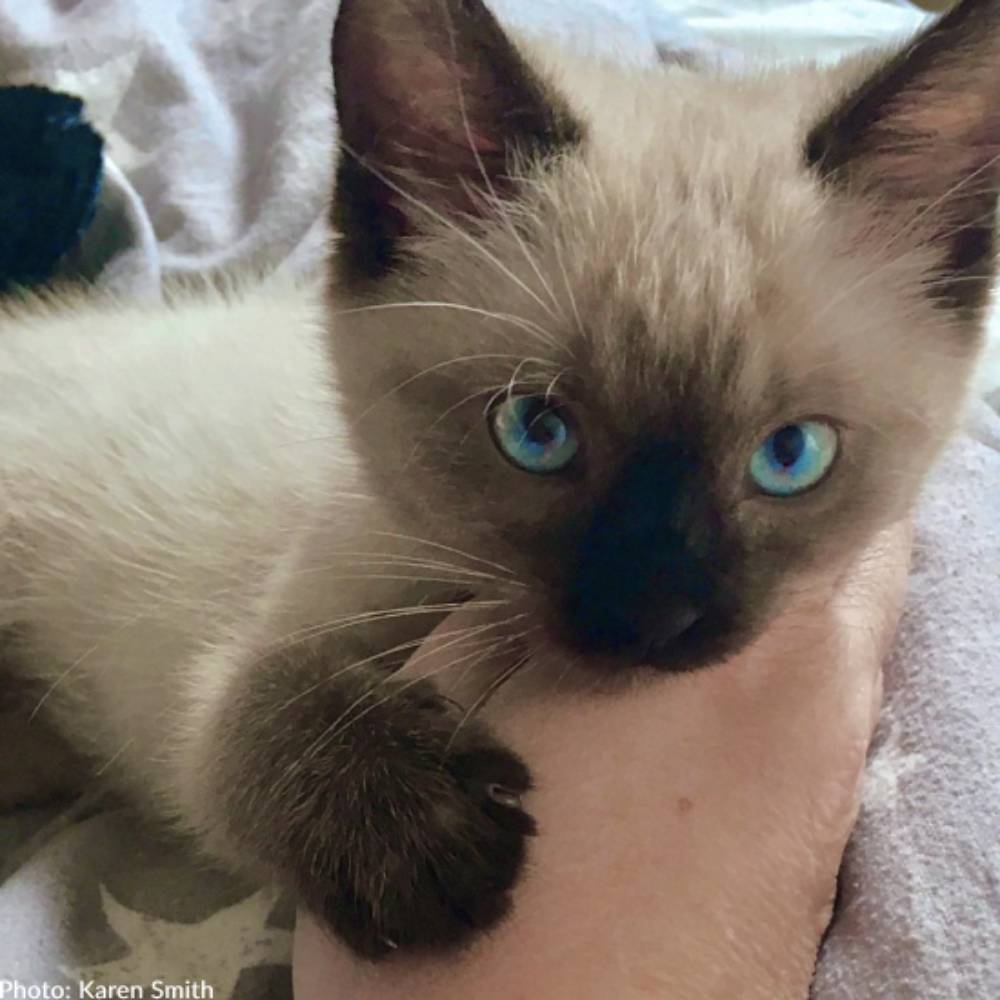 She told us, “It felt like this cat was at risk of being dumped or worse, and the kitten was tiny. He was too young to be separated from his mother. So, anyway, I got an Uber. So it was right across London because I live in Southeast London, and this was north London. And out in the sticks. And there might not have even been the cat. I was very aware it could have been a rouse to get somebody there. But I didn’t care, really. I was kind of ready, you know, for anything.”

Karen arrived to find a tiny Siamese mix kitten who the young man thought was a female and called Coco. She took the little feline back to her flat, even though she had never owned a cat, and surprised her boyfriend when he returned home from work.

Dave is a comedian but didn’t find it funny when he came home that night and discovered a sleeping kitten in the bedroom. But Coco quickly won his heart.

Karen cancelled her plans for the following day and spent it caring for Coco by first bringing the feline to the vet. Coco turned out to be a male with no microchip and a bit nervous, but otherwise in good health.

It was a learning process for Karen as she had pets when she was a child but never a cat. She quickly learned that cats do as they please and understand everything we say, even if they don’t listen.

Coco went through a rebellious teenage stage in which his mom said, “if he could slam a door, he’d slam a door, you know, if he knew he could physically.”

Over the past few years, Coco has grown into a handsome fella who hasn’t found his voice so instead of meowing for attention he uses his paws. He gently bats his parents for food or attention but has been known to “slap” children when they give him unwanted pets.

A sense of humor is a must when you own a cat.

The funny thing is Coco and Dave are now the best of pals and have a lot in common. They both love to be at home, are curious/nosey fellas, and adore Karen. Coco also loves toy springs and chicken (or any tasty food). Karen craves attention from her boy, but he is definitely a daddy’s boy.

She’ll take whatever hugs or attention he wants to offer and said, “I can’t believe I’m lucky enough to have him in my life.”

They rescued each other. Coco was rescued from a man who didn’t know what to do with a kitten and the tiny feline gave Karen someone to care for and brighten her day after she lost her beloved mother.

“I could have quite easily slumped into a depression, you know, try and do some not healthy things to kind of escape…and then this little fella came into my life,” Karen shared.

“I’d have had animals before and have loved them dearly, but I’ve never thought of how an animal could really, you know, fill that void when you don’t even realize you had a void. You hear quite a lot of stories about that and there’s no doubt they do.”

Coco’s larger than life personality had to be shared with the world so Karen created an Instagram and TikTok page for her special boy and he has thousands of admiring fans. Rescue cats are the best and Coco is living proof. His antics entertain his parents and people around the world. Be sure to follow him!

Learn more about Coco in the video below.