Is the volcano really going back to sleep now?

No one can tell for sure. Just eight months after erupting in March 2021, Fagradalsfjall exploded again this August. And compared to last year, this time was 5 to 10 times more powerful.

And the last explosion was dazzling, according to everyone who flocked near the eruption site. To them, the beauty of Fagradalsfjall’s glowing lava flows and dancing flames were both surreal and enchanting.

Located in the Reykjanes peninsula, Fagradalsfjall is among the major tourist attractions in this southwest region of Iceland. The peninsula lies on the Mid-Atlantic Ridge and is also home to the world-famous Blue Lagoon and the Keflavik International Airport.

Fagradalsfjall is a shield volcano that is surrounded by an uninhabited valley, Geldingadalur. The area is part of the precious Reykjanes UNESCO Global Geopark which is characterized by moss-covered lava fields, fissures, hot springs, and geothermal activity. Five municipalities with smaller towns and villages make up the geopark and help to sustain and promote its unique geological beauty.

Prior to the awakening of Fagradalsfjall in 2021, the region experienced more than 40,000 earthquakes and tremors, although most of them were weak and unnoticed.

Then, finally, it happened; on March 19, a 700-meter fissure opened within the volcano. However, no one in the peninsula actually felt a volcanic explosion, and it was only during an aerial inspection that authorities were able to confirm the eruption of Fagradalsfjall. 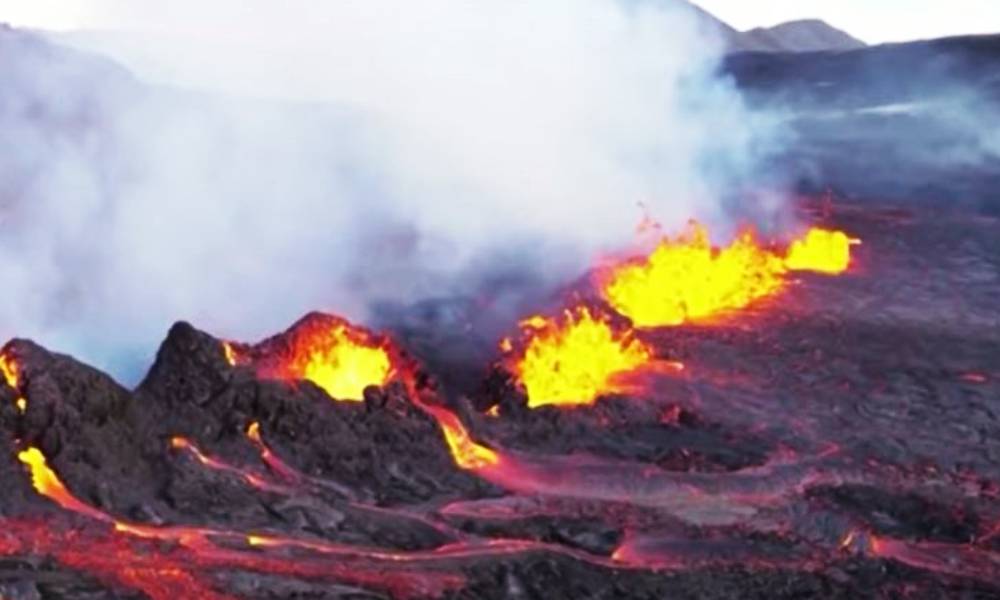 Lava was flowing from the fissure, but there was no emission of an ash plume. And since Geldingadalur is a sheltered valley with no inhabitants, the volcano posed no threat to humans and infrastructures.

It was unlike the glacier volcano Eyjafjallajökull, whose 2010 eruptions had caused a massive disruption in air travel in more than 20 countries. Fagradalsfjall’s eruption was marked with gentle and effusive basaltic lava flows that lasted till September.

Then everyone thought it had gone back to sleep.

Dancing Flames in the Land of Fire and Ice

Come August 2020, just eight months after its last quiet eruption, Fagradalsfjall was back in action, and, this time, according to witnesses, it was more powerful and dazzling.

“We were here, actually, last year when the eruption happened, just like within 24 hours later,” said Valur Grettisson, editor-in-chief of The Reykjavik Grapevine magazine. “But this eruption is at least five to 10 times bigger. And I have to say, this is like … a dancing fire. It’s so different from the other eruption that I’m just mesmerized by this. It’s beautiful.”

“It’s just crazy,” said Icelandic photographer Gunnar Freyr, who watched the second eruption. “I thought the eruption was going to happen maybe like in a few weeks, and now it’s here, and it is so beautiful.”

More visitors flocked to the site to gush over and take photographs of the natural phenomenon. Unforgettable images of dancing flames and glowing lava flows were shown on TV and shared on social media.

Finally, after more than two weeks of a magnificent display of its power, the volcano fell into inactivity again.

Is it over? No one can tell for sure.

But this kind of natural wonder never ceases to amaze people and change our planet.